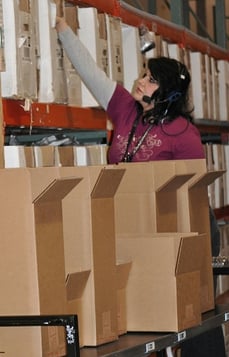 Retailers today are seeking new technologies and methodologies to optimize their distribution operations in light of new omni-channel fulfilment initiatives and requirements.  And, one technology-based methodology that is now increasingly being implemented is voice-directed picking.  Retailers are making voice picking a key part of their omni-channel initiatives because of its proven ability to increase throughput, improve customer satisfaction and dramatically reduce training times for peak season temporary employees.

Omni-channel fulfillment is challenging retailers to innovate in how they operate their distribution centers.  Having focused solely on fulfilling brick-and-mortar replenishment orders in the past, they are now also being tasked with supporting the company’s e-commerce business.

Because “hands-free, eyes free” voice-directed workers are significantly more productive (by up to 30%) than those using other methodologies or technologies, retailers are able to effectively increase the throughput of their existing distribution centers.  According to a survey from Honeywell, voice direction can add one hour of productive time per worker each month.  As a result, retailers are able to accommodate the replenishment demands of their stores along with order fulfilment requirements of their often fast-growing e-commerce business.

Keeping up with the throughput demands of omni-channel distribution is just part of the challenge, however.  When fulfilling order directed to customers, the need for perfect accuracy is mission critical.

There too, voice delivers.  Because voice-directed picking allows the worker’s eyes and focus to stay on the picking task versus be diverted to paper pick list or the screen of an RF device, it has proven itself at the most accuracy (often to 99.99%) picking methodology.

The same Honeywell survey referenced above, found that the average cost of one voice picking error is $59.  So, while voice helps retailers ensure customer satisfaction, it also helps them save $400,000 on average annually by avoiding mispicks.

Retail distribution centers typically experience at least one peak demand period annually during which order volumes soar far above normal levels.  During these periods, even optimized DCs need to bring on temporary employees to keep up.  And, those temporary employees need to be quickly trained to be both efficient (productive) and effective (accurate).

Once again, voice delivers.  Companies using voice report dramatically reduced training times for new and temporary employees: from weeks to days or days to just hours.  While new workers are easily able to catch on and pick faster, voice helps them be accurate from day 1.  And, with Vocollect voice, universal commands such as “help” and “say again”, allow new workers to quickly climb the learning curve without the help of supervisors or training personnel.

Vocollect voice-directed picking solutions have been optimizing the distribution center operations of retailers for nearly two decades.  Today’s omni-channel initiatives provide even more reasons to embrace voice.  Do so with the help of an experienced Vocollect voice solution provider to ensure your success in deriving all its benefits.